“There is no better day than today. There is no better life than this life.” The Quest of the Sparrows by Kartik Sharma and Ravi Nirmal Sharma seems to be suggesting the identical message through a little lengthy novel. This novel is about Partibhan, a person who becomes a spiritual guru after facing the hardships of life. However, this guru is very much like the Rajnikanth in his Tamil movies waving away the evils in the society and making the world a better place to live. 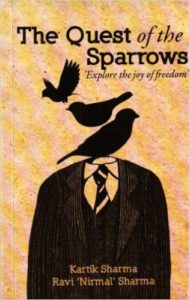 The novel The Quest of the Sparrows focuses on the social practice of spirituality and tests the practicality of this practice on various parameters. On foot expedition of a 600-km distance is a mere part of this; there is a larger design. On the way, Partibhan and his followers meet several challenges and the all-inclusive and fearless personality of guru brave all those. Surrendering of a robber fleet and change in the mind of a private detective as well as the reluctance in the mind of the assassin… everything suggests that positive forces can easily overcome the negativity around.

The readers can easily experience the drive in the mind of Pathan, the assassin, who recapitulates how he came to be so ‘unholy’:

“…. saw student leaders blowing college funds on wine and women. His teachers and professors passed undeserving students because of their ‘connections’ and tormented the deserving because they questioned the injustice.”

However, the book does not exemplify the ugly and the bad – it rather shows the image of Partibhan, as a kid and youth, he was also tortured and harassed by the society. He did not choose to be a murdered like Pathan chose. He rather became a catalyst to change others’ lives. With the course of the narrative, Partibhan becomes a mass-followed spiritual leader with disciples all over the world. He does social service. He builds schools. He builds orphanages. He builds hospitals… he does a lot. Ultimately, unfortunately, he is murdered! Why it happens; how it happens; what does happen after this? To know all this, let the readers read the book. The book is very interesting and it keeps the readers indulged thoroughly.

The book has garnered high praise for itself, perhaps because it claims to reflect the ‘higher beings’ in the content. Yes, there is a discussion on that. The book talks, in the course of the narrative, about so many instances where the readers can judge themselves. This is not a typical contemporary Indian fiction with sex and fun; this is a valid fiction with a message and it delivers that message very well. That’s why the book has been read widely and readers praised it. It’s the time you should give it a read and let yourself know how you rate it. Happy reading guys!