64 chapters of a thriller… 222 pages of a sense of kept-secret… many characters acting as if everyone has committed a crime or everyone is an innocent person… readers can only get to sense what’s wrong with the people in this novel – Deadliest Secret of Truth.

Arjun Kacper, the debutant author has penned down this crime thriller fiction which will be followed by other two novels. On the contrary to most of the crime thrillers written by Indian authors, this novel is set-up in the USA and also takes us for some time to the UK. This is something uncommon if we talk about the works by an Indian, but Arjun has handled the transition very well. Characters are animated and they are always doing the things which keep the novel moving. At the centre of Deadliest Secret of Truth, there are Jasper, Asher, Jim and Miguel. The novel begins with a strange event taking place by the hands of Jim Thomas in 1964… and this very event is the secret which is kept throughout the novel. Everything is going fine with the Jim Thomas company and the Thomas family until Miguel reappears with some insidious looking plans with a message that Mark Collin’s murder case is reopened. Meanwhile, Jasper falls in deep love with Sara and they are planning to get married. However, the introduction of Larry and Melissa changes the scenario and Jasper is left in the desert of misfortune. Charged with the murder of Miguel and booted out of the CEO position of the JT company, his life becomes dreadful behind the bars. Asher, his younger brother, tries his best to do something for Jasper but all goes in vain. 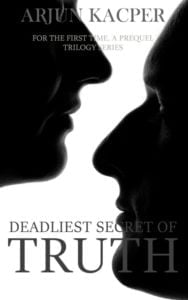 The theme of love and lust are very well contrasted in the novel by Arjun Kacper. What is between Sara and Jasper is indeed love; what is within Rob for Sara is lust and that lust consumes the life of that poor girl who plays into the hands of this wicked police officer Rob only with a hope of getting her love out of jail… she dies in penury of fortunes by committing suicide!

It is Mellisa, the cousin of Jasper, who unfolds the deadliest secret of truth towards the end of the novel. She catches the culprit red-handed and finally uncovers the episodes to get Jasper out. However, even Jasper is not a happy man at the end of the novel… things change very fast in the lines of Arjun Kacper and what changes for what is something that readers will have to find themselves…

To me, the novel was quite interesting and I enjoyed the sensation of suspense throughout. Like the characters in the novel, the readers is also in a condition of unrest until the last line. Arjun has handled the cobweb of characters very carefully and the book does not let you shut itself until you finish. Go for this one if you like reading crime novels because there is suspense, there is crime, there is passion and there is the SECRET!