What could be a better joy than reading something which takes you to the pit of self-pity and to the heights of perfection? Reading The Guide by R. K. Narayan is no less than a feeling of satisfaction and happiness for the destiny the characters meet, especially the character of Raju because there is always a sense of connect between Raju and the readers throughout the novel… Raju is there everywhere in the novel – from the beginning to the end, with Rosie and with Velan… Raju is the binding force of the novel who is there to justify the theory of Karma and all the good lessons that we are taught in the holy sermons of Gita! Raju is The Guide for Rosie to make her Nalini and then his soul becomes The Guide of himself. 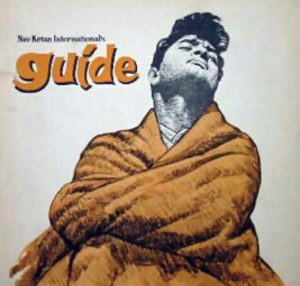 Written in 1958, the golden days of Indian novel writing, The Guide is surely a masterpiece production by the hands of R. K. Narayan. The novel has the theme of purposeful-love and selfless-sacrifice as the major drives. Raju, in spite of all the fame that Nalini attains, remains the central character of the novel for good or the bad reasons. At the beginning, he steals the heart of Rosie and also steals her from Marco. In the middle, he steals the past from Rosie and transforms her into a new person – Nalini. Towards the middle-end, he steals the belongings of Rosie and steals the little shred of goodness from himself…

It is only after the release of Raju from the gallows that he becomes a person who is looking for something beyond theft and something beyond life. He poses as a sanyasi and ends up being one in reality. The belief of villagers in his super-abilities and then the disgust of Raju for himself and his selfishness and then ultimately the faith of Raju in God… everything towards the end becomes meaningful and very interesting for the readers. This is the ending of the novel that I like the most.

Technically, the novel is a quality plotted and beautifully themed one. It has no flaws as it also goes in synchronisation with other ‘Malgudi Novels’ by R. K. Narayan. The little town is always there to add further soul to the novel. Narayan must have believed in some high-life authorities which he has reflected here. He has given his character the time and space to repent – and live the joy of atonement before sending him to the heavens. Out and out the novel The Guide is a masterpiece that a reader must read to see and feel what a real Indian novel looks like… one of my best reads till the date.

The Guide by R K Narayan

You must read this novel! A masterpiece in every sense that one can make!