I could easily have rated this novel by bestselling novelist Chetan Bhagat very high had this novel actually been what it promises the readers to be. However, the game plan is like playing entirely opposite of what your strategy tells the audience. One Indian Girl, touted by the ‘influential critics’ as a feminist novel and also propagated by the novelist to be a mouthpiece of the female issues in India, fails to impress the actual readers on those fronts. You can seldom find issues pertaining to women in the novel once you begin reading it. This is a novel that has limited itself to the bedroom and further enclosed itself within the dimension of a bed where the pseudo-feminism games occur – sex and the fiction! Was it worth it! This is the story of Radhika, a very versatile character created by Chetan Bhagat with very high hopes and noble intentions. However, this character has been converted into a woman who could not cross the fence of her fancies and reach the world she deserves. Or, in more appropriate or the most suitable words, the novelist did not want her to deal with the actual issues of feminism. One Indian Girl, at last, lingers in the minds of a reader as a show with some bed scenes and an act of sex with a few explicitly offered pieces of direction.

It is another remarkable quality of Bhagat’s novel that his characters, especially girls, are well-settled and working (if they are into a professional career) in good companies. Here as well, Radhika is well-settled and she works for the well-known international companies and also travels to foreign nations. However, instead of showing her achieving the heights of career and challenging her male co-workers in a healthy competition, she is shown indulging with guys in extramarital affairs and comparing the pleasure quotient in sexual acts. What? Is this feminism for you, Mr Bhagat? Looking back into the days of early years’ of feminism and then comparing it with the days of these days’ feminism, especially by the experts of morphology like Chetan Bhagat, it seems more than horrible and even unfortunate.

If you ask me whether something remained in my mind that I would like to recall, I would certainly point out that the sexual display by Mr Bhagat, who has been accused by a woman of sexual harassment online in an ongoing #MeToo Movement, was lustrous and nothing else was worth remembering. Now, this will create the impact that the novelist might have thought of. I am sure that the novelist should have wanted that young readers share these sexually loaded pages with each other and the novel soars on the heights of popularity. And this happened as well! 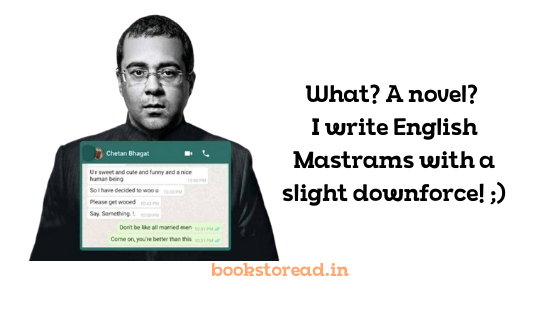 Review by a man who read all the Chetan Bhagat novels and feels miserable!

One Indian Girl is a train journey that begins with a motif to reach the heights of feminism but touches the bottom of confused sexual fancies.